A Power Club Dramatis Personae: Who’s Who in Damon’s World 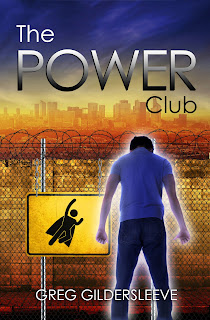 Now that The Power Club™ is available, let’s review who the main characters are and what they can do.

In The Power Club™, kids who develop super-powers must live inside “the district,” a small, confined series of neighborhoods in which they are separated from “ords” (people who have no powers), other than their immediate families, and have limited freedom. Kids can gain more freedom if they join a special club—if the club accepts them.


DAMON NEUMEYER (“Master of Darkness”)—Age 13, Damon has the ability to create darkness.  He can plunge a medium-sized room into total darkness by creating a “darkspace,” a mysterious environment that appears to be a part of him. Only Damon can see inside the darkspace—images appear black and white to him. No one can hear inside the darkspace unless he opens a “soundspace” for them to communicate. Neither Damon nor anyone else can see or hear what goes on outside the darkspace. Damon has lived in the district since age six and, because kids aren’t allowed to use their powers in public, he hasn’t had much chance to develop his power; hence, the reason he wants to join The Power Club.

KYLE POWELL (“Teleporter King”) – Age 15, Kyle can teleport himself, other people, and objects. The person or object being teleported appears to “scramble” as if its insides and outsides are being rearranged and reassembled somewhere else.  People who are teleported often feel a brief sense of nasuea afterwards. While the distance Kyle can teleport himself or others is uncertain, he refuses to “send” anything out of his line of sight to prevent it from merging with another person or object. Kyle can teleport two people at the same time, but doing so is very dangerous.

DENISE EVANS (“Forture Teller”) – Age 14, Denise can see the future. Her power, so far, is very imprecise.  For example, she can predict an event which will occur but not exactly when it will occur. Or she may know the exact time of an event but not how it will turn out.  She may sense that others will need her help but not know the exact details.  On the other hand, Denise can predict with alarming accuracy how other people will behave or what they will say. Denise claims her visions are never wrong.

VEE EVANS (“V-Blur”) – Age 12, Vee—Denise’s younger brother—possesses super-speed. Vee does not know exactly how fast he can run because, being confined to the district, he has nowhere else to go. But he’s fast enough to avoid Damon’s darkspace and to zip around unseen by most people, who perceive him only as a fleeting blur. Because of his power, Vee sometimes talks fast and can be very impatient.

ALI REEVES (“Flyer”)—Age 14, Ali can fly—a power most kids in the district would love to have. But Ali, too, hasn’t had a chance to learn how to control her power. Being gravity-less and ground-less, she can easily float away. However, she is learning to have greater self-confidence and can swoop in and out of dangerous situations.

DANNER YOUNG (“Tower”) – Age 14, Danner can grow to enormous heights. As he grows, his strength and weight increase proportionately. His upper limit is 30 feet, but he rarely grows higher than 20 feet. His power gives him enormous self-confidence and an aggressive personality. He keeps his normal height at six feet just so he towers over other kids.

These six principal characters in The Power Club™ are not the only kids in the district with powers. Soon we’ll take a look at others, including the villains.