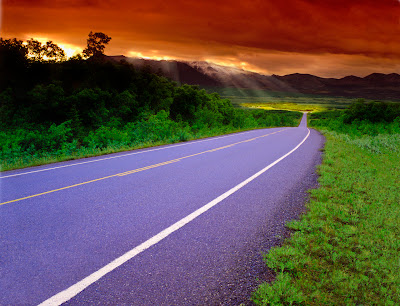 The dreaded deadline is upon me, but that can be a good thing.  Sometimes writers need to revisit previous ideas about writing.  Here's a favorite post from March 2012:


Writing is a lot like embarking on a journey with an incomplete roadmap.  You think you know where you’re going, but the map doesn’t show the unexpected detours, the places where the road suddenly ends, and the new highway that’s under construction.

Also, you entrust your car (the story) to a driver (your main character), who has a mind of his own, is often distracted by shiny objects on the side of the road, and wants to stop occasionally to take care of bodily functions (sleeping, eating, going to the restroom).

You, the writer, want to keep your story moving forward in a predetermined direction, but the incomplete map and willful driver get in the way, creating writing roadblocks that threaten to derail your story.

It’s enough to make a writer give up on the journey and start over (e.g., rewrite the story from the beginning or start a new story) or even stay home (e.g., give up on writing altogether).

But don’t be hasty.  Sometimes roadblocks take the story in a new and exciting direction.

Writing roadblocks come in many forms.  Sometimes your character is faced with a decision, and you have no idea how she will decide.  Or another, unexpected character shows up, and you don’t know what to do with him.  Or the plot twist you thought was going to be brilliant turns out to be lame.

What do you do now?

Coming to a writing roadblock is not pleasant, but it can be the best thing to ever happen to your story.  Here are eight tips for working with your roadblock instead of fighting it:

3. Be prepared to accept the worst. Writers can hold themselves back if they fail to address this question.  And it is a hard question.  After all, we like to think of our main characters as winners, and much of popular fiction teaches us that the hero always wins.  But doubt and uncertainty can paralyze us as writers if we don’t face the hard questions.

4. Determine the steps your character will take to reach her goal. Once again, you don’t know if she’s going to succeed; you only know what she’s going to do next.

5. Determine the obstacles in your character’s way.  If you’re like me, creating obstacles for your character is tough.  It’s like tripping your own child while he’s carrying a tray full of expensive china across the room.  My advice: Don’t stress too hard in dreaming up obstacles.  Your character will trip on his own at some point, which leads me to . . .

6. When an unexpected roadblock occurs, see it as an opportunity for growth – for both your character and yourself.  This is where you truly test your mettle as a writer.  This is where both you and your character discover hidden strengths.  Just as adversity in the real world can bring out hidden talents, forgotten skills, and surprising character traits in people, so too can roadblocks reveal aspects of your story that keep it fresh and exciting.

7. Keep forging ahead. Go around the roadblock.  Fly over it.  Dig under it.  Heck, it’s your story: drive straight through the roadblock if you wish.  Whatever you do, keep writing.

8. Don’t start over.  If you do, you deprive your character and yourself of a chance to grow.  Instead, have the courage to keep going forward, wherever the story takes you, even if the outcome differs from what you originally expected.

Writing is discovery, but not all discoveries are pleasant.  When a writing roadblock threatens to derail your story, seize it as an opportunity to trust in yourself and in your story.  After all, a roadblock may just make the entire journey worthwhile.

What do you think?  How do you deal with writing roadblocks?

How Do You Deal with Your Writing’s Growing Pains?


Writing can be like unruly children. Just when you think they're ready to grow up and do you proud, they throw fits, stop cooperating, and make you wonder why you wanted to have kids in the first place.

So you have a book or two (or three or four) under your belt. You have your writing process down pat.  You’ve mastered the art of fiction and the science of winning over audiences. Through a long, painstaking process of trial and error, you’ve devised a formula for success and it works every time.

And then it doesn’t.

The new work in progress doesn’t quite gell. After writing twenty thousand words, you realize you don’t know the characters well enough to know what they want. The complicated back story fascinates you more than what they are doing now. Your beta readers complain that this story reads just like your last, or it reads like an outline. Or both.

You, my writer friend, are experiencing growing pains.

Or, to be more precise, your writing is.

Writing, like a child, grows in fits and starts. It constantly tests its boundaries. It seems happy one minute and hysterical the next. It is no longer pacified by the routine that worked last year. And, like any beleaguered parent, you can’t understand what to do with your six-year-old who has overnight turned 15.

Growing pains are uncomfortable and scary for writers. They force us out of our comfort zones and into unknown territory. They cause us to question everything we do and everything we’ve done.

They may even force us to reevaluate why we wanted to be writers in the first place. Where’s that untold wealth and fame we’re supposed to get? Why isn’t writing getting easier?

Does parenting ever get easier?

Yet growing pains can be positive and necessary for writers. They could be a way for our subconscious minds to point out things to us we don’t want to face. Maybe they are calling attention to areas in our writing or our lives (which often are intertwined) that need more attention. Maybe they're trying to tell us we’ve crossed one bridge and it’s time to do something new.

While we try to figure out what our unruly writing-child is telling us, here are three tips for dealing with growing pains:
·

Whatever you do, don’t give up.

How do you deal with your writing’s growing pains?  Share your tips below.