3 Steps to Boost Your Writing by Thinking Like a Kid 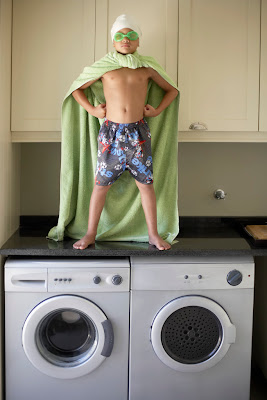 I haven’t been to a comics convention in about seven years.

There are reasons for this—lack of money, nothing in particular I want to buy, and little interest in current comics.

But since comics formed the foundation of much of The Power Club™ , they remain close to my heart.

This weekend, the biggest comics convention, Comic-Con, is going on in San Diego, CA. Thanks to updates and even a live feed from friends who are there, I can keep up with all the excitement.

The con was also featured on this morning's news. The report spotlighted a middle-aged woman dressed as Ma Hunkel, the original Red Tornado, complete with a cooking pot with eye hole cutouts for a helmet.

Even when I went to cons, I didn't dress in costume—but not because I didn't want to. Costumes can be expensive, and I also couldn't decide which character to go as.

(My ideal costume would have been Lightning Lad's 1960s outfit, complete with robot arm.  There's something inherently exciting about a blue cape and lightning bolts as a chest insignia.)

Going to cons and dressing in costume is something a lot of people do not understand—to them it looks silly (no sillier, I would argue, than dressing in costume or wearing war paint to go to a football game).  And yet such silliness—acting like a kid, if you will—can be a vital part of being a writer.

Last night, coincidentally, I watched a program on the National Geographic channel that encouraged adults to do just that: think like kids. The program, Brain Games, explores how our brains function and how we can boost memory—“use it or lose it,” as put by the program’s oft repeated mantra.

In one segment, both adults and children were shown a series of simple abstract drawings and asked to generate ideas for what the drawings could be. Guess what—the kids generated more answers than the adults. We’ll get to why later on.

Thinking like a kid, however, can also boost writing, which involves doing several kid-like activities: creating something out of nothing, combining ideas that at first don’t seem related, and thinking outside the box—the very processes Brain Games suggests can boost memory.

Here are three suggestions for how thinking like a kid can improve your writing:

Quick question: What’s the difference between work and play?

Both can involve the same types of activities, effort, and even rules (if one is playing certain games).

One difference is that, in play, there are no serious consequences if you fail. Sure, you may lose the game and whatever rewards go along with winning, but that’s all. Play, in its purest form, does not affect your income, social standing, or future prospects.

Kids usually don't worry about these things when they play; neither should you.

2. Don’t worry about whether it’s right or wrong.

Remember those kids who were more creative than the adults in the Brain Games segment?  Why was that?

Kids, according to the program, do not have the experience or context to know whether an answer is right or wrong. They do not self-edit or judge their answers.

Do not self-edit or judge your work, either. Save that for the revision process.

While most writers find keeping a routine helpful—such as writing at the same time every day, writing in the same space, or even drinking the same type of tea while writing—it’s a good idea to shake things up once in awhile.

It doesn’t even have to be a major shake-up.  For example, I used to write these blog posts while sitting in a particular restaurant. But the last few, including this one, were written in a different restaurant.

A small change, yes, but a significant one. This particular restaurant reminds me of the places my family and I used to go to for breakfast while on family vacations. There’s even a view of traffic cruising along a busy street, as if I were next to a highway.

Mentally, being in this place puts me back in those childhood vacations. The result (after starting out with no idea what I was going to write about) is the post you are now reading.  (And if you don't like this post—well, maybe you're not thinking like a kid!)