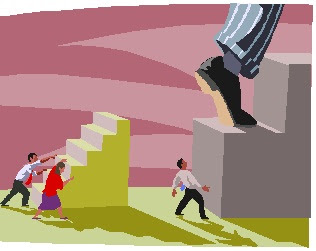 By popular demand (okay—one person requested it; to me, that qualifies as popular demand), here are some more thoughts on when to break the rules of writing and when not to.

When people become too concerned with the rules of writing, they seem to be focusing on the wrong things. Sure, rules are important and writers must know them well enough to know why they exist, when to break them, and when not to.

If you don’t know the rules, writing can seem like bumbling through a landmine: a single comma splice or POV shift can blow your story apart.

But too much concern about the rules can distract you from the deeper purposes of writing and inhibit you from exploring what your story is really about.

The deeper purposes—the questions you should focus on—are these: What are you saying and why are you saying it? Who will be reading your story? What do you want them to get out of it?

Writing a story is fundamentally not much different from writing a college research paper: You still have to narrow your topic, expand on what others have written about that topic, and say something new about it.

A lot of writers fall into trouble by simply regurgitating what’s already been said. Their story (or paper) adds nothing new or says nothing different. It aims at merely recapturing the experience the readers had in another and probably better story (or paper).

Here are three steps for moving beyond the rules and saying something new:

Step 1:  Get the Reader to React

How can you say something new when everything has been said before? A good example can be found in the textbook The Writer’s Way by Jack Rawlins and Stephen Metzger.  One of the student essays in the book is a brilliant piece, “Lucy, You Have Some ‘Splainin’ to Do” by Nicole Benbow.

Benbow does what I like to call connecting the dots. She takes seemingly unrelated sources such as the 1950s television show I Love Lucy, the country band the Dixie Chicks, and Dove's 1990s "Evolution" commercial, finds their common ground, and weaves them into a compelling essay with an original point.

Her point (or thesis):


Classic television sitcoms tend to depict the same story over and over again. Women belong inside cooking, cleaning, sewing, etc., while men are supposed to be out working and bringing in the money. (336)

Why pick on I Love Lucy, one of the most beloved television shows of all time, one that is often considered ground-breaking for featuring an unconventional female lead in an unconventional mixed marriage, and whose comedy continues to hold up decades later?

Without disputing any of Lucy's achievements, Benbow examines the content of the show: “What is unfortunate . . . is that when [Lucy and Ethel] try to go out and get a decent job they fail miserably. Once again the show was subtly hinting that women did not belong in the work force” (340). Think about the famous chocolate factory episode.

It depends on your point of view.

Is her thesis arguable?

And that’s fundamentally what any research paper or story should do: Make an argument. State a case. Get the reader to think, feel, or react.


Step 2: Use Your Topic to Address the Reader's Present Concerns

If all Benbow did was challenge our perceptions of a beloved sitcom, she would have done her job. But she goes further by suggesting that modern TV shows aren't much different:


On Desperate Housewives, Susan writes children’s books (note that her office is in the home). Lynette is a working mom, and there have been several episodes where she has taken the brunt from family, friends, and strangers for not taking enough care of her family and working too much. (337)

Such attitudes, Benbow argues, spill over into other expectations of women in the media. The scorn heaped by former fans upon the all-female Dixie Chicks serves as an example. After one of its members criticized President George W. Bush in 2003, the band became the target of hostile Internet postings. Benbow claims that such reactions show how our society still frowns upon women with strong opinions.

Instead our culture continues to favor images of women as homemakers and beautiful models, the latter idea challenged by the Dove commercial.

Step 3: Get Over the Notion that You Have to Say the Last Word

As I said, though, Benbow’s point is arguable. When I ask students to identify positive depictions of women in the media, they mention Oprah Winfrey, characters from the Law & Order franchise, and even Lara Croft, Tomb Raider as examples of strong, independent, and competent women.

None of these examples diminish Benbow’s argument. Rather, they highlight the fact that she doesn’t have to say the final word on the subject. All she has to do is get her audience thinking about how women are portrayed in the media. The reader can agree or disagree, but the reader must react in some way.

And that’s what you have to do as a writer of stories, as well.

Sounds easy enough, but it ain’t. In many ways it's easier to focus on rules instead. Errors are usually easy to spot and fix.

It’s much harder—and riskier—to think about how your readers will respond to your work. What if they don’t like it?  What if my point of view is wrong?

But writing soars when it takes those risks and gets the reader fully engaged in the work. Instead of walking through a minefield of rules, the author becomes like the Wright Brothers, boldly pioneering new and dangerous ideas . . . flying.

OK, I think I get where this is going, but in all earnestness, moving beyond the rules has a lot more to do with a story's content than just "women don't belong in the workplace". While I understand your choice of example, in 2012 it's a bit dated.
Regarding the reader's reaction(s), when someone calls you on the phone at 11:30pm and screams "you killed him!", that's a reaction worth staying up late to receive.
And as for the last word, the author, in my opinion, should ALWAYS have the last word; if not, then someone else should be writing the stories.

Just my opinion, though. :)

Although the textbook was published in 2009, I don't agree that the essay is dated. Have we really grown so much as a culture in three years--particularly when major political candidates insist on absurdities such as "legitimate rape" and that children born of rape are a gift from God?

And my point about "the last word" is that any piece of writing, even fiction, contributes to a conversation, not ends it.