NOTE: DUE TO A POTENTIAL SECURITY BREECH, I'VE HAD TO ALTER THE SUBMISSION TERMS OF THIS CONTEST.  SEE THE ** BELOW.

How much description is too much?
Writers often struggle with this question.  Should you describe your main character's hair color?  Hair length?  What type of clothes she wears?  Her facial expression? Her living room?
There are no easy answers, as suggested by a conversation I recently had with a group of fellow writers.
One writer, the talented  Eve Brackenbury (who also owns Prospero’s Parkside Books in Blue Spring, MO, where I did a reading along with members for my writing group on Thursday night), asked each of us to describe the layout of the house in a novel by one of the other writers.
Even though we’d all read the book, each of us described the house differently.
I then asked the others to describe Damon, the main character in my novel-in-progress, The Power Club™.  Again, responses varied: Damon was stocky or slim, he had brown hair or reddish-brown hair, he looked like a younger version of me, etc.
And that’s how it should be.
As Eve noted, writers should give each character or setting just enough description to tell the reader what she needs to know and allow the reader's imagination to take it from there.  Too much description can prove jarring to the reader, particularly if it’s not clear from the outset.  There’s nothing more annoying than visualizing a living room on the left side of the house as you enter and discovering two chapters later that it's actually on the right.
And, really, does it matter if Reader A’s impressions are the same as Reader B’s?  Each reader constructs the story in his or her head based on the words on the page.  If some readers see Damon as stocky, their right.  If others visualize a slim darkspace caster, they're right, too.
But our conversation left me wondering: How do other readers visualize Damon?
Let’s see if we can find out.
Announcing the First-ever Semi-Great Gildersleeve Writing Contest
The goal is simple: describe my character.
First, read excerpts from the book – the prologue, Chapter 1, Chapter 2, Chapter 3, and the bonus story, “Santa Drives a Chevrolet” – to get a sense of the character.  (Note: Feel free to ignore the silhouetted images on Chapters 1-3.)
Then let your imagination run wild.
If you’re an artist, you may draw the character.  If you’re a writer, write a paragraph describing him: his hair color, hair length, build, clothes, how he carries himself, etc.  What is he doing?  How does he look when he's using his power?
The only clue I’m going to give you is Damon’s age: In most of the novel, he’s 13.  In the prologue, he’s six.  In “Santa,” he’s nine.
I’d prefer entries to focus on the 13-year-old Damon, but, if you’ve got a wonderful idea for how one of the younger versions looks, knock yourself out.
**Copy your description or drawing into a comment below.  Be sure to include to include a link so I can contact you if you've won the prize.  Entries must be in the comments field by no later than noon on February 21.  I'll hold a drawing for the prize on February 25. 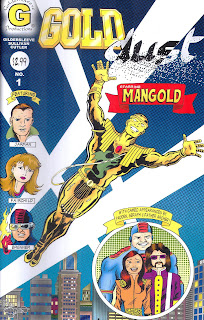 The absolute BEST entry will get something special: a signed copy of my comic book, Gold Dust—rare, only a few copies are still available.
So, you can’t lose:  you get free publicity . . . AND you may get a free, signed comic book!
What are you waiting for?  Sharpen those pencils, flex those fingers, and get cracking!